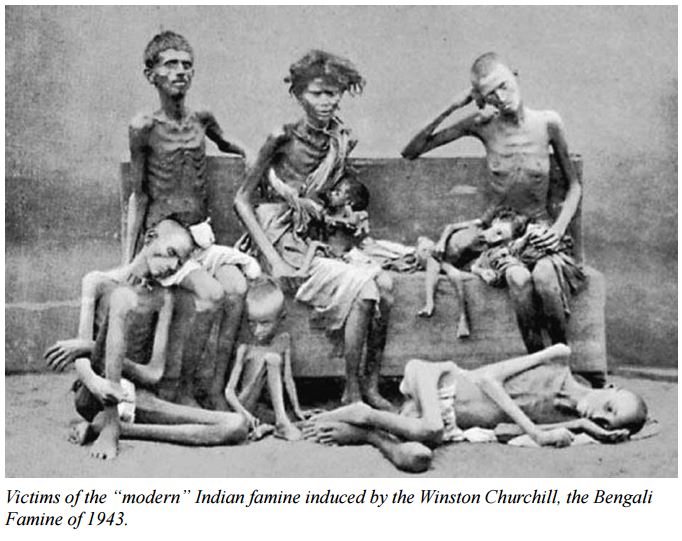 And it is possibly for the same reason why so many conservatives are silent on Capitalist genocides.

King Leopold II was a capitalist, for example, when killing ~10 million congolese during his colonial enterprise.

All of the colonial operations in Africa were capitalist – they extracted mineral resources while using the population as cheap (slave) labor.

British Empire, throughout the ~250 years while it was effecting deaths of a possible 100 million or more people across the world, was capitalist:

Almost all of the puppet dictatorships across Africa, South America during cold war who killed or vanished millions of people each, were capitalist regimes.

Even as of now, many genocides are being committed in various parts of the world. For example Indonesian government is repressing and killing Papuans since 1960.

The beneficiaries are multi national corporations which are enjoying Palm Oil plantations. Have you heard of that at all?

Lets go back to 1930s. During Great Depression, millions of people in United States itself died through poverty induced famine, sickness, exposure to weather in shanty towns. Leave aside due to lack of healthcare and other important life-critical services. Hoover government refused on ideological grounds to do anything about it, telling that it should be left to ‘free market’.

Have you ever seen any of these deaths being attributed to Capitalism?

They are ‘tragedies’. They are due to ‘unfortunate circumstances’. It is “just the way things are”.

Even today, millions of Americans are dying because they don’t have the money to pay for healthcare.

Ever heard anyone attributing these deaths to Capitalism, despite the reason these people are dying is because of profit mechanic inherent to Capitalism? Which excludes anyone who can’t pay from even life-critical services and products?

In contrast, despite the above acts happened due to the ideological tenets of Capitalism which required profit maximization, the genocides you speak of in certain episodes in history did not happen due to ideology of Communism because it could not be justified per its ideals:

When countries which were practicing state capitalist + welfare formats (not communist, any of them) engaged in internal strife or discrimination against various segments of their population, or engaged in large scale purging of populations in foreign countries, these were never due to ideological grounds:

In Communism you can’t justify killing anyone due to any ethnic, religious, cultural difference because Communism is a dialectic materialistic ideology which only involves itself with economic aspects of life and economic justice.

So when a cultural group in China started purging another, rival cultural group due to (sometimes thousands of years) old rivalries and cultural biases, these were never justified on ideological grounds in regard to Communism – what are you going to claim?

“Everyone should have a right in participating in economics equally, therefore we are killing this people”?!?!?

“Communism requires economic equality, therefore we are killing this people because they are of X ethnicity?”

The arguments do not make sense. The first half of the sentence and the second half do not connect. There isn’t a way to justify purging/killing of any amount of people per Communism’s ideological tenets, because they purely involve economic democracy.

Therefore, not surprisingly, such acts were done by ‘security concerns’, or ‘cultural revolutions’ or other concocted rationale based on perceived or real threats.

Left is not jumping in to every such off-base accusation of ‘atrocity’ because the accusations are not made on logical basis, but instead based on an intent of smearing by ‘identifying’ the ideology with certain incidents/countries in history.

Its no different than red baiting – identifying USSR with Russians, identifying Russians with Mongols, talking about genocides and then identifying Communism with USSR and then calling anyone who wants to raise taxes ‘Communist!’ to shut them up.

It worked so well for the last 50 years because there are so many people who fall for such ‘identification and guilt by association’ tricks – just look at any Trump rally.