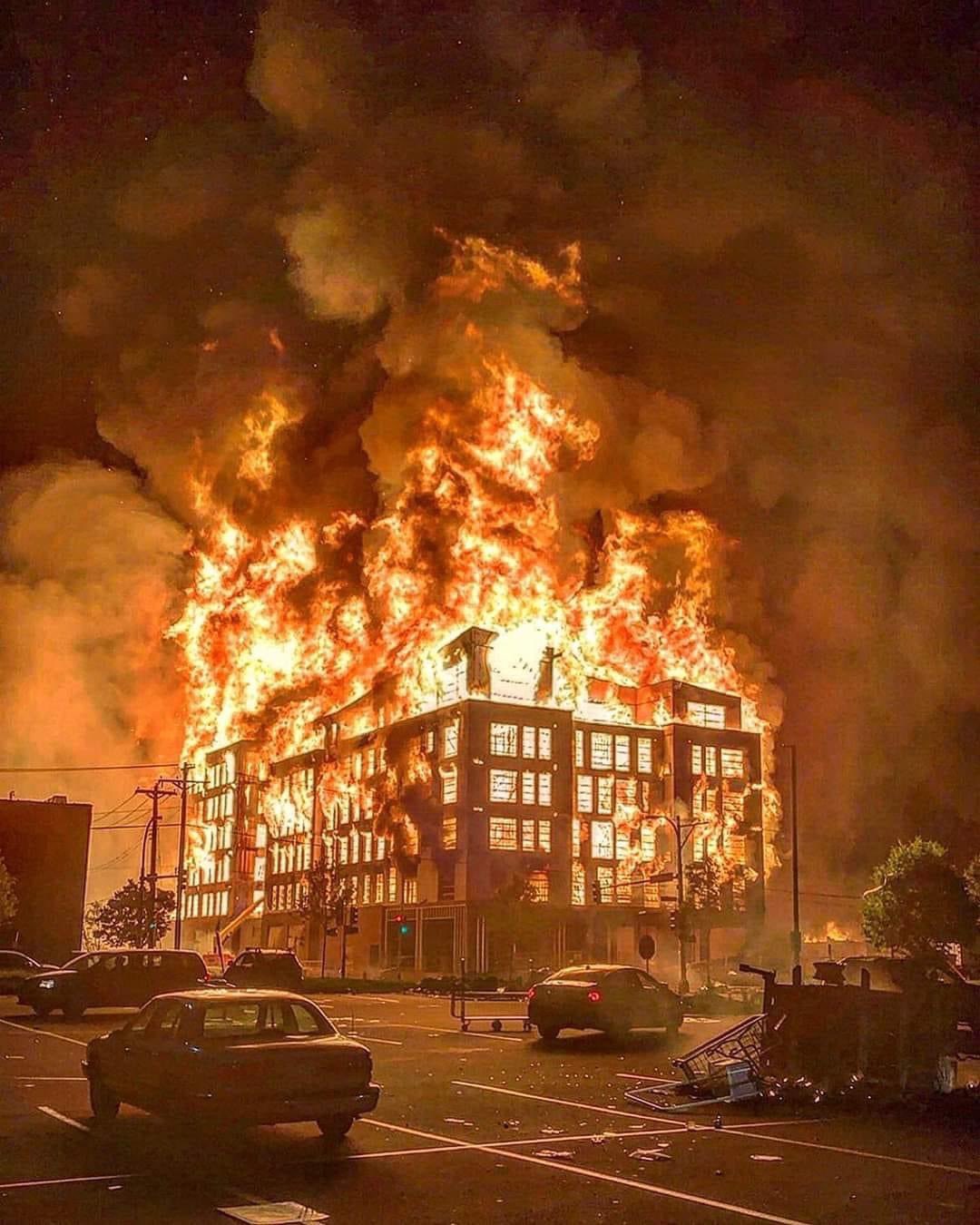 You can kill only so many of a people before they start to fight back. There is a tipping point for this kind of stuff. And apparently it was this one.

Since mid 2000s when social media came to being and mobile phones with video capability propagated, there were frequent cases of police brutality documented and posted online. Statistics showed what was documented was only a small fraction of what was happening. Such cases and the impunity with which US police engaged in such brutality increased regularly during the last 15 years.

Those who enabled this situation defended the police. Every case had a ‘but’. There was always an excuse or a rationalization for each of them.

There are no buts in this one.

For the first time, there is an undeniable case of casual murder of a defenseless, pleading person who was warning that he could not breathe. He was pleading with his mom.

Pleading with their mom or the god is something which many people do in the last moments of their life.

And yet, the psychopath sitting on top of this person, the unrepentant, kept sitting on him after he died. With total impunity, he had no qualms or worries about what might happen, ignoring continuous warnings from bystanders for a total of 8 minutes,

He did not even doubt for a second that the person whom he was brutalizing could die, despite his pleas and warnings from the bystanders, obviously empowered by the inexplicable legal immunity granted by the abomination of a US law that is the qualified immunity.

Kill someone as police with impunity. And you will get away with it. At most some minor discomfort, get fired from one police force, then just go to join another – if anything happens at all.

This was the case for each and every police brutality case in the past 20 years. Towards Blacks, Latinos or other minorities, or towards whites of the ‘correct’ background, the American police kept brutalizing and murdering Americans with impunity, as the establishment literally did nothing to address it. Some moral ‘outrage’, some sentimental or harsh words, some ‘reconciliatory’ statements, some mulling of some limited reform, some hashtags…

Murder of Floyd showed people that things wont change unless they take action themselves. For, the establishment doesn’t care, police unions protect murderers, media obscures or rationalizes the brutality, whereas conservative segments even go as far to justify everything that’s going on and blame the victims. And they do that even as statistics say totally the opposite.

The anger behind the protests, explained in 4 charts

The immense immunity granted by the law to police, the constant protection of police by the establishment in all these cases, immense funds going to militarize the police all added up and created a situation in which US police kills thousands of people every year.

Worse, this situation of immunity for murder attracts the worst psychopaths to the police force – where in civilized world can someone kill another human being in peacetime with impunity outside US police force?

Add to that the problem of actual, intentional white supremacist takeover attempt of US police and military,..

Franklin Veaux’s answer to How deep is the institutional racism in the US police force?

..and you have the formula for the invading army that is the US police force today.

People have seen that they are face to face with what increasingly resembes an actual, invading, oppressing army instead of the supposed security force that was supposed to protect them. And they saw that there was absolutely no trend of this changing, and things got worse and worse since Trump got elected as he encourages and provokes such conservative extremist segments.

To add insult to injury, what the establishment expects from the people is to go back to work at the risk of their lives to float the stock market – back to the jobs which they no longer have.

The people are now out of cash. US food banks are over capacity, and are not able to meet the demand. People are hungry as a result.

But establishment seems to just expect the people to just suffer and die in silence.

Nobody waits and sits in silence as his or her children starve. Nobody.

Hence the wide scale protests, rioting and looting. Hungry people feeding themselves. If they peacefully protest, they are repressed anyway, so it does not make any difference if they are rioting or protesting…

Because, the social contract is gone. People see that they are just left to starve. Left to their own devices. Not only they are regularly murdered with impunity, but they are now expected to starve and die in silence as well. Those lucky ones get to go to low paying jobs where they can risk covid and an early death. So that the stock market can break records again.

As far as they are concerned, the society has collapsed. For them, that is the reality. They are expected to starve and die but not make a noise.

What does US establishment do in response?

Sics at the people the very police which the people are protesting , labels them terrorists and then mulls sending the army against them. The army.

It turns out that everything which the people were made to believe was a lie. All the rights, all the freedoms, all the national mythology, turned out to be lies.

The system does not discriminate in starving people for profit.

They are totally ignored, denied, repressed, left to starve and die anyway. So, they have nothing to lose.

They are as out of touch and clueless as the French aristocracy before French revolution.

What is amazing that similarly dumbfounded are the various countries with which US has a beef with. They take a few jabs at the hypocrisy of US in propagating ‘democracy’ elsewhere but not allowing it inside US, but the jabs are muted. And they are rather scarce.

It seems these countries are unable to believe that a country’s entire establishment can violate all its principles and contradict everything that it has been saying for a long while.

And yet, still keep saying the same things even as it violates every principle and contradicts its every statement, in front of the eyes of the entire world. How can this be possible…

This is what brings us to the ominous kicker and the bigger problem behind all of this:

American ultra right has been taking over US establishment and US institutions slowly in the past 2 decades. This – what is happening – is the glimpse of what they are capable of. And also a statement on their true nature.

These totally unstable, delirious, fundamentalist and hypocritical people are capable of anything. You cannot reason with them. And at this rate, if they are not stopped, they will be in full command of the US nuclear arsenal along with any other strategic weapon.

Meet the Group Trying to Change Evangelical Minds About Israel

In the sermon, Vaught outlined dispensationalism, a theological theory of how history unfolds in “dispensations” or ages, leading up to the rapture of all Christians, the dispensationalist precept that God will rescue Christians from the world before wreaking havoc on an unrepentant world. In this theological theory, Israel as a nation-state fulfills biblical prophecy that Jews would return to their homeland, paving the way for Jesus’ second coming.

The faces of “The End of Days”: Christian Zionism in Israel

Before, they used to say that Israel must be first raised, then destroyed by Arab states in a nuclear war, but recently they seem to have lowered their expectations, and ‘any nuclear war’ seems to be ok now, from what can be garnered from the changing narrative in ultra right online communities and what their prominent talking heads are saying. There are various varieties of this ‘end of days’ expectations revolving around Israel or other actors. But all of them involve some kind of Apocalypse scenario.

Its not only the flock who believes this imminent ‘end of days’ prophecy which they must make happen if it doesn’t happen by itself. There are prominent figures among them who advocate this openly, and various prominent influential figures close to the administration are reported to have the same faith as well. People who affect policy. Even further, some of the administration, like Pompeo, US Secretary of State, are among them.

These people are deranged lunatics who can actually act on such a delirium. One would think that no political movement or segment could be that crazy. But not only there are examples of such incidents throughout history, but also these people already demonstrate how extreme, unstable and delirious they are with the response of US government to the protests. Donald Trump, be it with his words, be it with the latest photo op he pulled off at that church in D.C., is giving messages to those people. Not even the larger conservative base, leave aside moderate conservatives. That’s the reason for the Bible and apocalyptic symbology visible in the photo op and the ‘Jericho walk’ which he performed during that photo op.

But many of Trump’s evangelical supporters, far from Washingtons political stage, saw the move as a victory in a world rife with evil.

The Horbowys had gathered in Tallahassee, Florida, to watch live as Trump walked from the White House to St John’s. “My mother just shouted out, ‘God give him strength! He’s doing a Jericho walk!’”

A Jericho walk, in some evangelical circles, refers to the biblical book of Joshua, where God commanded the Israelites to walk seven times around the opposing city of Jericho, whose walls then came crashing down.

US has 4000~ active nuclear warheads, along with whatever weapon that was invented based on newer technologies. Because nuclear weapon technology is now ~100 year old news. And aforementioned people are either in control of these already, through whomever figure they pushed into the administration, or soon will be.

So the world is sitting on a ticking time bomb. This is not a Trump problem. Trump may go away soon, or with the election, or may even have another 4 years and go away. But these extremists won’t go away without entire state apparatus making them go away. If the saner segments in US cannot take over control of US and clean these deranged lunatics from state apparatus, they will continue taking over and complete it before this decade is out.

This means that the world is running on borrowed time. Without any Jesus to save anyone from a nuclear holocaust.

In the best case, rioters must turn into an organized political movement with teeth.

But at this point, anything to improve the trend is acceptable.

Amazingly just one week of rioting accomplished so many things which all the civil action in the past 20 years couldn’t – from hasty charges to the perpetrators of this last visible crime to the proposition of the repeal of qualified immunity law, from various organizations cutting ties with various police departments to a lot of white supremacists or moderate conservatives losing their recent primaries.

This situation is bigger than America. It involves the well being of human civilization.

Every. sane. actor. must take whatever action they can to ensure the safe continuum of human civilization.