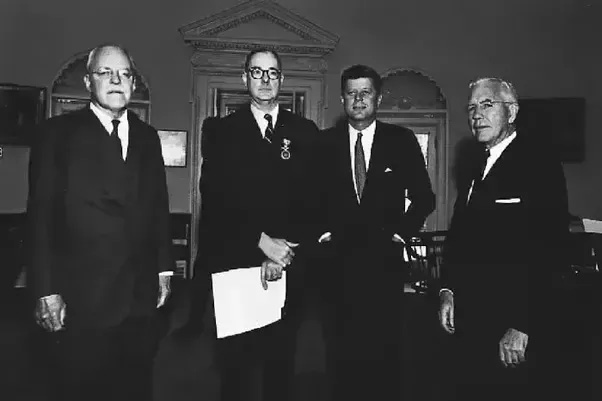 The most reasonable and well backed answer to this question is CIA director Dulles, who was an military-industry complex extremist of the most extremist kind.

Kennedy hampered various CIA operations Dulles had invested in – considerably. One of them was a coup which Dulles prepared and put into action to depose then President of France, Charles de Gaulle:

The above is no conspiracy theory, it is not an assumption, neither a hypothesis. CIA did arrange a coup to depose the President of France, and it was put into motion, President of France had to call in the support of people against the military, people set up barricades on the streets to defend against the army in case the army acted. Kennedy personally intervened and rendered all the help he could give to de Gaulle, including leaking information to press, French government, giving intelligence, and even more:

Kennedy then underlined how deeply estranged he was from his own security machinery by taking the extraordinary step of asking Alphand for the French government’s help to track down the US officials behind the coup, promising to fully punish them.

The rift in between Kennedy administration and the US intelligence machinery was not new – it went back to Bay of Pigs:

Reston communicated the rising fury in JFK’s inner circle over the CIA’s rogue behavior, in the wake of the Bay of Pigs fiasco and the French escapade: “All this has increased the feeling in the White House that the CIA has gone beyond the bounds of an objective intelligence-gathering agency and has become the advocate of men and policies that have embarrassed the Administration.”

Kennedy’s strong show of support for de Gaulle undoubtedly helped fortify French resolve against the rebellious generals. In the midst of the crisis, the American president issued a public message to de Gaulle, telling him, “In this grave hour for France, I want you to know of my continuing friendship and support as well as that of the American people.”

But it was de Gaulle himself, and the French people, who turned the tide against the coup. By Sunday, the second day of the coup, a dark foreboding had settled over Paris. “I am surprised that you are still alive,” the president of France’s National Assembly bluntly told de Gaulle that morning. “If I were Challe, I would have already swooped down on Paris; the army here will move out of the way rather than shoot…. If I were in the position Challe put himself in, as soon as I burst in, I would have you executed with a bullet in the back, here in the stairwell, and say you were trying to flee.” De Gaulle himself realized that if Challe did airlift his troops from Algiers to France, “there was not much to stop them.”

But at eight o’clock that evening, a defiant de Gaulle went on the air, as nearly all of France gathered around the TV, and rallied his nation with the most inspiring address of his long public career. He looked exhausted, with dark circles under his eyes. But he had put on his soldier’s uniform for the occasion, and his voice was full of passion.

De Gaulle began by denouncing the rebellious generals. The nation had been betrayed “by men whose duty, honor and raison d’être it was to serve and to obey.” Now it was the duty of every French citizen to protect the nation from these military traitors. “In the name of France,” de Gaulle shouted, thumping the table in front of him, “I order that all means — I repeat all means — be employed to block the road everywhere to those men!”

De Gaulle’s final words were a battle cry. “Françaises, Français! Aidez moi!” And all over France, millions of people did rush to the aid of their nation. The following day, a general strike was organized to protest the putsch. Led primarily by the left, including labor unions and the Communist Party, the mass protest won broad political support.

Over ten million people joined the nationwide demonstrations, with hundreds of thousands marching in the streets of Paris, carrying banners proclaiming “Peace in Algeria” and shouting, “Fascism will not pass!” Even police officers associations expressed “complete solidarity” with the protests, as did the Roman Catholic Confederation, which denounced the “criminal acts” of the coup leaders, warning that they “threaten to plunge the country into civil war.”

Hundreds of people rushed to the nation’s airfields and prepared to block the runways with their vehicles if Challe’s planes tried to land. Others gathered outside government ministries in Paris to guard them against attack. André Malraux, the great novelist turned minister of culture, threaded his way through one such crowd, handing out helmets and uniforms. Meanwhile, at the huge Renault factory on the outskirts of Paris, workers took control of the sprawling complex and formed militias, demanding weapons from the government so that they could fend off rebel assaults.

As you can note, this conveniently untold part of history is practically open war among US administration, and US intelligence apparatus. In no uncertain terms.

Dulles was an extreme sociopath.

Not surprisingly, there was nothing regarding Dulles in Warren commission report, and the commission concluded that one crazy lone gunman did all:

Hardway on Dulles, RFK and the creation of the Warren Commission – JFKfacts

On November 25, Katzenbach delivered his famous memo on the subject to Bill Moyers. It is this memo that begins:

“It is important that all of the facts surrounding President Kennedy’s Assassination be made public in a way which will satisfy people in the United States and abroad that all the facts have been told and that a statement to this effect be made now.

“1. The public must be satisfied that Oswald was the assassin; that he did not have confederates who are still at large; and that the evidence was such that he would have been convicted at trial.”