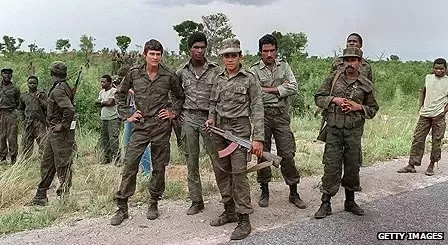 If we consider the immense economic strangulation they have been subjected to by the illegal US (and naturally international) trade blockade, never ending CIA terrorist attacks against their mainland (not talking about Bay of Pigs), ever-impending threat of invasion, ceaseless attempts at overthrowing them from the inside (latest being State Dept’s Cuban twitter project U.S. secretly built ‘Cuban Twitter’ to stir unrest  ), being held back from acquiring any important technological equipment through a multitude of means, scarcity of their resources, population and whatnot, they seem to have achieved spectacular results:

They have a history of doing massive international aid as well – sending doctors everywhere, aid materials as they can send, and some other very, very important stuff – like ending South African apartheid!

Fidel Castro And The Cuban Role In Defeating Apartheid

That bit of the history surprisingly goes untold in the west about apartheid – the narrative is as if the west ‘fed up’ with apartheid and it just dissolved due to public pressure.

Apartheid ended when South African apartheid regime was beaten in the military operation it did against Angola to prevent the independence movement in Angola from liberating the country from colonial influence. It was to be a puppet state after independence, but independence movement took over the country. They were also in alliance with ANC, the African National Congress (Mandela’s party), and if they triumphed, ANC would get support from them, due to being just north of the border. And not only political support, military support as well. The struggle in South Africa against apartheid ended up militarizing long time ago due to South African repression leaving no room for any democratic discourse.

So South Africa basically attacked Angola. If they could suppress this movement and install a puppet regime in Angola, then the nationalist, independence or anti-apartheid movements in that region could be suppressed. They even had a warlord ally to use.

Cubans went to Angola first as trainers, then in force – 10,000-20,000 Cubans fought  against South African army. USSR did not want to get involved initially, but after Cubans committed themselves this strongly and kept insistent, they came along.

Eventually, close to 1989, Cubans and Angolans beat South African army soundly, and the way to South Africa from Angola was open. Angola would be able to aid ANC politically, financially and militarily.

That is the moment in which South African regime started negotiations. Not even one second before.

Throughout all this affair down to the last second, US was backing South Africa in every way it could. When the cause was lost, anti apartheid rhetoric began. Up until that point they had no problems with South Africa.

So, all that stuff Cuba accomplished, plus ending apartheid in South Africa.

If you ask me, that’s a pretty spectacular achievement for an economic system.

Now they also have a lung cancer vaccine to boot.

Cuban Life Expectancy Among the Highest in World at 78.45 Years

How Cuba is Achieving Food Security Without Destroying its Environment