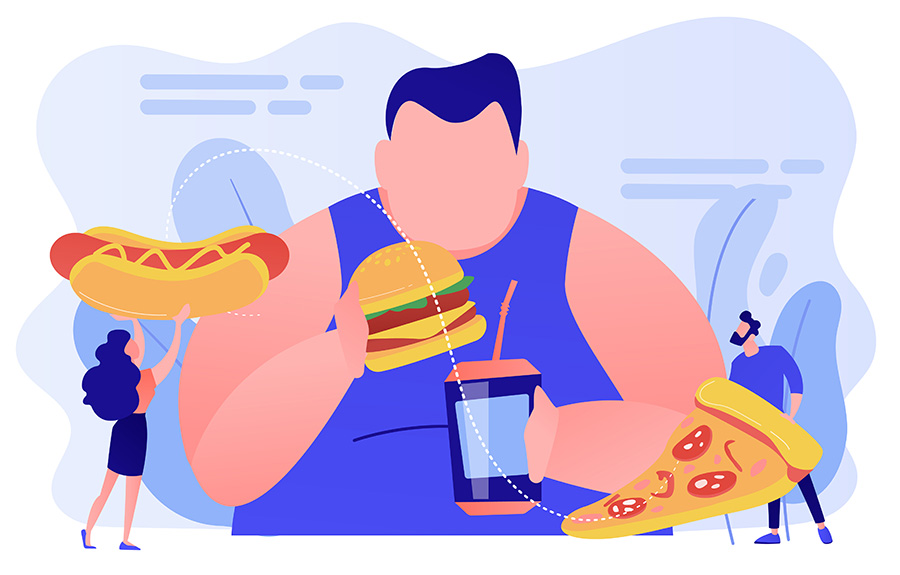 Eating is a major way with which humans cope with stress. Its built in by evolution. It activates various biological mechanisms that relaxes the body and mind and allows the person to cope up with stress.

Additionally it has a built-in, implied evolutionary message: It means that because you are able to get food and eat, you will be able to survive — there is no famine, natural calamity or any problem that prevents you from getting food and eating. So its a mechanism that works in multiple levels to cope up with stress.

Why stress causes people to overeat

And people are likely want to eat more to co activate this mechanism because the levels of stress in the society has increased in the past few decades.

All of these contribute to stress and anxiety in the societal psyche. Moreover, all of these exist even before people actually, physically overworking themselves to stay afloat.

And they are inevitable — even if you are in a better position, the dominant atmosphere of stress and anxiety in the society would eventually affect you too. There is little escape from the social psychology if you are living inside the society and interacting with people.

When we look back in earlier periods in history, even 30–40 years earlier, we see that things were not the same.

Back in 1970s, an earliest time period which is shown by many as a time in which people were not so obese, we see that people have economic security, future prospects, expectations from life. They were able to get jobs that actually paid living wages, they were not concerned about the education of their children, they were not worried about their retirement. Even less, any of the post-Reagan/Thatcher cutthroat environment of social discord and competition is nowhere to be seen — people were neighborly, social, more humane.

Actually we dont even need to go that far back — we can just look at societies with more economic security and future prospects for the average citizen — countries with higher levels of economic equality and better economic security not suffering from obesity compared to, say, US, where economic insecurity was explicitly advocated by policy-makers and built into the economy to keep the wages low as an economic tool to keep the labor costs low. Like how Europe is not suffering from such a severe obesity crisis.

It goes even further — looking at China, where there isnt a strong social state compared to Europe has been built, people are largely still not obese — because they have economic prospects, they are looking at a better future, things are improving — not worsening — and in the background there is a psychology of ‘things are getting better’.

Most extreme examples that demonstrate the proposition are poorer countries which did not adopt neoliberal economics — societies which are still poor with a lot of problems, but societies which do not have a system that intentionally impoverishes and deprives people to make them insecure to maximize corporate profits. We dont see such societies suffering from obesity despite facing a lot of problems.

Because in these countries, societal fabric is not destroyed since people are not hostile to each other due to being in a cutthroat competition for low paying jobs. There is still solidarity, family, friend connections, neighborhoods, other social groups. People somehow make do, survive, and overcome difficulties, mostly together.

In contrast, if we take a totally opposite example like US, we see people in total economic insecurity even looking at the month ahead of them, leave aside having any security for the next decade while retirement seems to be out of the horizon.

They are competing with bottom dollar jobs with their neighbors, they see that practically nobody is breaking out of economic insecurity while those in the neighborhood who are said to have ‘made it’ by creating their own local small business always hang by the thread and they look at getting bankrupted by Walmart or another major corporation eventually, same situation persists among larger connections of relatives, friends and colleagues.

So, there doesn’t seem to be anything better in the future for these people. They are disempowered, diminished, made into drones that get exploited. Despair, anxiety, stress all in one go.

But they can do one thing that is in power to address this: Eat, to activate the biological systems of the body that releases hormones that relieve stress.

So they eat. The one thing they can do. And the result is obesity in society.