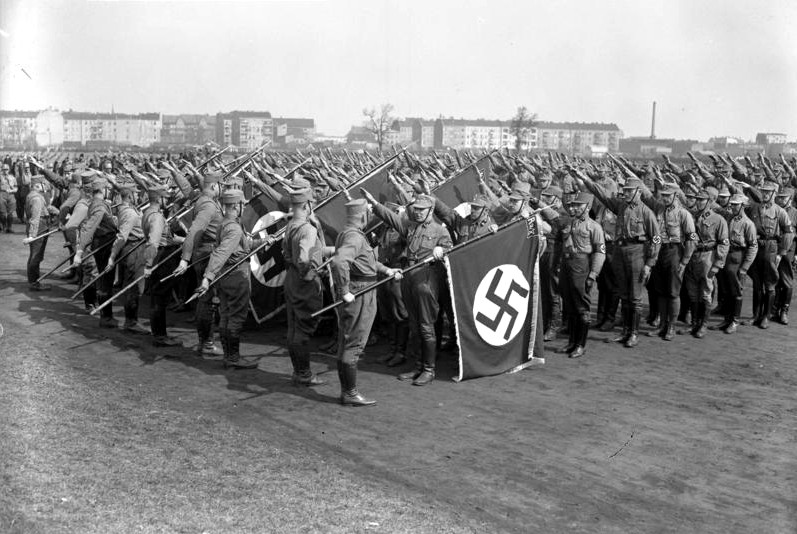 If you were a socialist, they were socialists too.

If you were a militarist, you couldn’t go wrong with them – they were militarists too!

They were whomever you wanted them to be. Until they got your vote, that is…

There was significant social democrat vote in Germany in interwar era. ~20%+ on average. Socialists and non-communist versions of left could also be combined into Socialism. Nazis needed that vote.

There were many varieties of nationalism in Germany, ranging from German nationalists to remnants of 19th century Prussian nationalism manifesting as militarism, so they needed to be sure to cover everyone.

The workers’ movements was strong, and rightfully, their demands for better wages, less hours, paid vacations, workplace safety and so on were shared by many people.

The moment they won elections, they burned the parliament and established a dictatorship. There goes the ‘Party’ of a democracy”

Very soon after, they banned unions, there goes “Workers'”.

They did a few “People’s vacation cruises” for show, on which they sent working class people a few times. They engaged in massive scale infrastructure building, but that was for military preparations. Nothing much of Socialism – there goes ‘Socialist’.

As time went on, the political situation became more ‘Leader Cult’ than any kind of Nation or German related environment and many Germans were so easily sent to die , so there goes ‘Nationalist’ and ‘German’. Still, these aspects were the ones that remained, and used extensively to justify the dictatorship and incidentally they are generally the most used rhetoric and aspect of any fascist dictatorship.

As you see, there wasn’t anything Socialist about Nazis. The word and rhetoric was there solely for purposes of getting votes, and the rhetoric was always preceded by, and subservient to, nationalism as Nazis described.