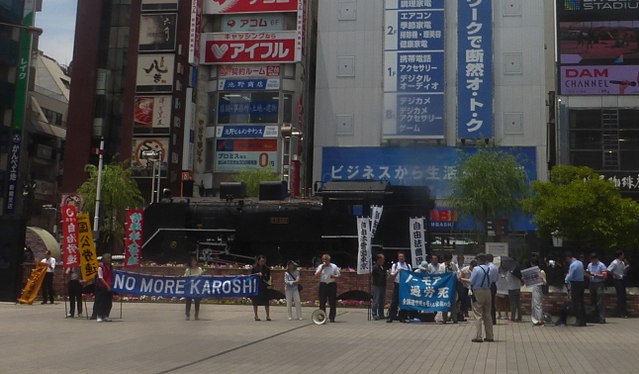 Moreover, he is also statistically wrong, and the obsessive-compulsive workaholic mindset he mistakes for ‘ethics’ is perilous, as the case of Japan demonstrates:

Japanese have that ‘ethic’ for over 50 years now…

The answer is probably, actually almost certainly; none.

Results of Japan’s ~50–60 years’ of ‘hard work’ culture have been unproductive, burned out people, lack of inspiration, motivation or creativity, and even society-wide collapse due to this mindset having been adopted society wide. Leave aside not having provided ‘competitive edge’, the ‘hard work’ ‘ethic’ is practically demolishing Japanese society:

The environment which causes a percentage of people to just drop dead from work related burn-out or stress, affects the ones it doesn’t kill greatly. From constant stress leading to health problems to a burned out psyche not being willing to engage in any social endeavors, the effects of hard work culture is felt in many aspects of the society ranging from societal relations to even birth rates.

In Japan, people are so burned out from this “work ‘ethic’ society” that youth are intentionally and consciously refraining from marrying or having babies because these require an additional effort of humongous size on their already burned out and exhausted existence. Those who still go for it, may end up as part of the yearly Karoshi statistics.

The societal burnout even ends up in wider social phenomenon which destroy the fabric of society, sometimes rightfully, like in the case of Hikikomoris who break out of society due to their disillusionment, or like the increasing number of NEETs (Not in Employment, Education or Training), or the ‘Freeters’, those who seek out ways to live without having to go into that meat grinder.

Each and every single of these social phenomenon point to the massive danger of such ‘hard work ethic’, and some of them, like in the case of falling birth rates, have society-destructing scale effects.

Of course, way before the society is affected to this point, all that stuff that is important for any competition, like creativity, inspiration, innovation etc, go out of the window at an early point. Like the immensely low productivity and creativity rates versus the amount of ‘work done’ in Japanese companies, show.

Japan is seeking solutions to this Karoshi problem, and the general problem of ‘hard work ethic’, at a national scale. There are already society-wide talks and initiatives to reduce the amount of work done, and adopt a more balanced work life. And even the government itself, which is a conservative right wing government, is trying to find solutions.

It would be foolish to go down the same route which crippled Japan. Not only for Silicon Valley, but for any other country.

Silicon Valley didn’t come to being through mindless slave-labor.

You need to find creative, ground-breaking solutions, sometimes for problems which do not even exist yet.

That’s not something which someone who is burned out from 12 hour, 6 day workdays, can do.

And yet, not surprisingly, majority of innovative, ground breaking and humongous digital age companies, old and new, aren’t from China’s Silicon Valleys with their ‘hard work ethic’, they are from Silicon Valley, with its ‘work life balance’. Despite the immense incentives, subsidies and ease which Chinese government provides to its own start ups.

There are a few major Internet presences from China, like Alibaba and so on, but it would be ridiculous if a civilization of 1.5 billion people did not produce any such entity. Especially with the amount of subsidies, incentives and even protectionism China lets these companies enjoy.

But on the other hand, the disproportionate amount of ground-breaking, huge companies from Silicon Valley compared to its size and lack of state support, duly prove that its not the ‘hard work’ that makes the digital age company, but a creative ‘work life balance’ approach.