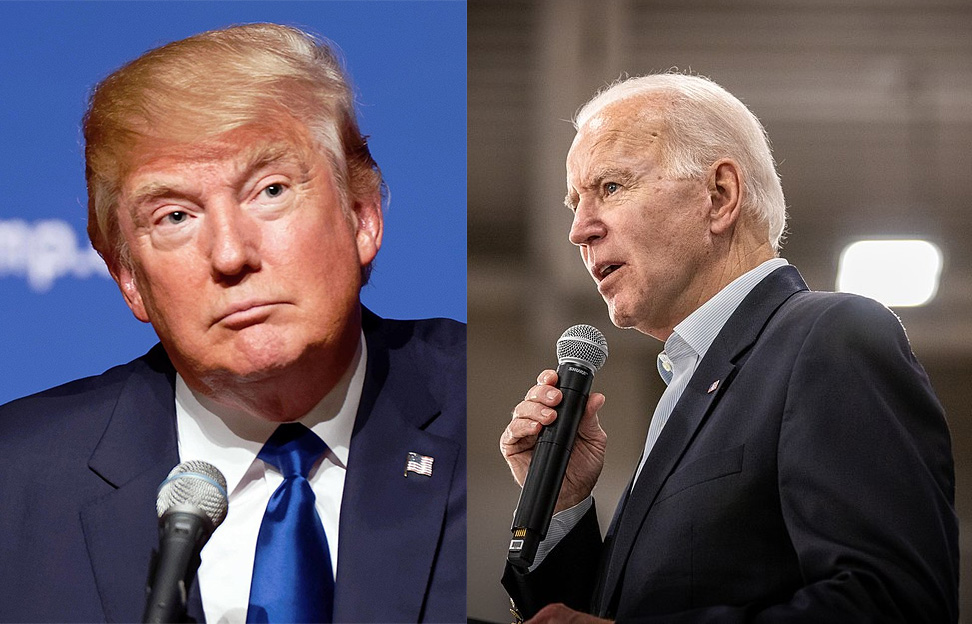 Update 02 Sep 2020: It turns out there actually is a difference in between Trump and Biden, due to the fact that some of Biden administration’s policies seem to be crafted and pushed by Sanders and his faction at Democratic Party – from infrastructure bill to the protections implemented for the people during the pandemic. This sets Biden administration apart from Trump’s, who said a lot of nice to hear things, but did not follow up on any of them. One major example being actually withdrawing from Afghanistan, and even more:

Let’s examine the track record of these two politicians and see their differences:

Establishment Democrats represented by Biden want to continue the status quo which they themselves helped build over 40 years:

Joe Biden to rich donors: “Nothing would fundamentally change” if he’s elected

Hillary Clinton Gets $13 Million From Health Industry, Now Says Single-Payer Will “Never, Ever Come To Pass­”

Actually, with his move to make diagnosis and treatment of Coronavirus free, Trump is now way to the left of Democrats like Pelosi, who say that coronavirus testing should be ‘affordable’ and treatment should be ‘accessible, even as a pandemic rages.

AS of this moment, Trump stands more to the left of Democrats with his push to make healthcare for coronavirus testing and treatment free for the duration of the pandemic.

For all the talk in media to the contrary, Trump is ahead in response to the pandemic compared to democrats.

In addition to pushing free testing and treatment, Trump is now also floating the UBI which was proposed by not only AOC, but also conservatives like Tom Cotton as a response to coronavirus pandemic.

The recent paid sick leave bill that was passed with GOP and Democratic agreement excluded majority of US work force from the bill, and provides only paid sick leave to only 20% of the population. Which was presented falsely by Pelosi as ‘paid sick leave’ – in a case of lawyerly lying. This is a gigantic boost for the propagation of the virus since majority of US workforce, from people who work at McDonalds to wherever you can imagine have to work while sick as of this moment.

Trump is facing opposition in his own party, and yet increasing conservative politicians are pushing for an UBI instead of sick leave to solve this problem.

…Democrats are pushing for Kamala Harris’ max $500 per family, means tested ‘solution’, and are trying to reduce the amount that is going to be paid out by opposing any other solution.

So, whereas Democrats still talk about things being ‘affordable’ and still refraining from actual paid sick leave, Trump administration is now running left of Democrats on this matter in all respects, ranging from free treatment to UBI.

Biden was the one who pushed the bankruptcy bill which prevents people from declaring bankruptcy to escape soul crushing student loans.

And before 2008, he did this just before recession, in full knowledge and preparation of the recession.

He opposes free college as well, flip flops like an experienced neoliberal when challenged.

As of this moment, Trump stands to the left of Democrats with his waiver of student loan interests held by Federal institutions for the duration of the pandemic.

It seems a decade cannot start with Joe Biden advocating cuts to social security – which he did 4 times in the past 40 years.

Here is a video of him advocating social security cuts to pay for tax breaks back in 1995:

And here is the news about how he was trying to cut social security as recently as 2013:

So when Biden says he never advocated cuts to social security, he is flat out lying.

He would likely cut social security if he is president, except it would be presented under some kind of ‘reform’.

This is the environment which Biden help create:

Too young to die, too poor to retire

Old people cant retire, and they are too young to die, ending up needing to get mobile homes and travel like a nomad in gig jobs to be able to afford food and housing. Housing, which happens to be their mobile homes…

Since Trump also wants to cut social security, there is absolutely no difference in between them. Trump may actually shy away from it due to reaction. But Biden has been pushing it for 40 years now.

For all their talk of ‘fascism’, Democrats seem amazingly supportive of all the fascist stuff – they are the ones who are giving Trump those powers which they complain about:

They were also giving a standing ovation to Trump’s military budget as they voted to pass it recently, as you will remember.

There is little difference in between Trump and Biden on this matter. Both GOP and establishment Democrats bloat military budgets.

What’s more, the concentration camps were there under Obama, except they were just called ‘detention’ centers.

Cages to hold immigrants were built in Obama’s time as well.

There is little difference in between Trump and Biden in this matter.

Biden was actually advocating for Iraq War even before Bush was president, in 1990s.

He voted for it after successfully advocating it along with Republicans and establishment Democrats when it finally was voted in 2002, and now he lies about it.

Biden misleads about Iraq War vote: ‘I didn’t believe he had those weapons of mass destruction’

Biden has all the talking points of military-industry complex. There is absolutely no difference in between electing him or Trump.

For all his antagonism against China, which actually was started by Obama under the name “Pivot to Asia”, Trump has scaled back or stopped various CIA proxy wars in Middle East, the foremost being the one in Syrian regime change operation.

Absolutely no difference in between Democrats and Trump:

Democrats have been nominating or appointing or helping appoint conservatives to supreme court for 40 years now.

And its not like Democrats support or push any policy which would go to a conservative supreme court and get stuck there – they are totally in line with every single neoliberal polich which Republicans support. So, supreme court is a null argument in respect to any difference in between the two parties.

There is absolutely no difference in between Trump and Biden on this matter, because no policy which would actually better the lives of a majority ever goes to supreme court. For all the rest, GOP and Democrats are in agreement.

Biden not only supported segregated busing…

Joe Biden didn’t just compromise with segregationists. He fought for their cause in schools, experts say.

…he went as far to say that desegregation of busing would create a ‘racial jungle’.

Old comments from 1977 resurfaced, quoting Biden as saying that non-“orderly” racial integration policies would cause his children to “grow up in a racial jungle.”

Its not so much different now, as Biden just let out his real stance about immigrants in the recent debate by his usage of the word ‘alien’ to describe them.

Bide had no issues openly declaring on live TV during VP debates in 2008 that he opposed gay marriage.

Asked if he would support gay marriage, Biden said: “No. Barack Obama nor I support redefining from a civil side what constitutes marriage.”

So he was on the same page with Sarah Palin on this issue. Until it became politically damaging to be so.

In contrast, for all his conservative talk, one of Trump’s campaign managers was gay – and also, this:

Donald Trump’s “support” of LGBT communities in one image

Even though the above Guardian article tries to diminish it, Trump is seen there unfurling a LGBT flag himself as a conservative candidate, and this is no small thing.

Which is not so surprising in the light of the fact that Donald Trump is actually a New York liberal who is acting as a conservative president.

This is also manifested in the below appointment:

Acting head of US intelligence community, is gay, since start of Trump administration.

In this matter, Biden is slightly at advantage due to the perceptions created by the media and the conservative talking points of Trump, despite Trump administration does not seem to have any trouble with gay people, even going to the extent of appointing them head of entire US intelligence.

In the light of all these, when you get down to real world and look at real problems of real people, it ends up that so much of the noise that is being made for ‘Trump being horrible’ and ‘needing to be removed’, do not make any sense for the people who are actually suffering:

People die when they cant muster $30 more for healthcare. At best, they go bankrupt. 40,000/year is estimated to die from not being able to afford healthcare every year, which is a conservative number since it does not account for people who never went to a hospital because they knew they couldnt afford, and died at home instead. People dying in a hospital parking lot after being kicked out of the hospital is a commonplace event in US.

Students cant pay their debt, which magically keeps increasing even as they pay increasing amounts back, gig jobs are commonplace, people are one paycheck away from bankruptcy, hundreds of thousands of homeless across USA.

Democrats built this America in cooperation with Republicans.

Biden is one of them, one of the foremost establishment Democrats who pushed for this result. And they have not changed their attitude a single bit.

Vowing Not to ‘Demonize’ the Rich, Biden Tells Billionaires ‘Nothing Would Fundamentally Change’ If He Was Elected

Having gone as far to lying about getting arrested with Mandela in South Africa, not to mention his Iraq war vote and literally everything else, Biden cannot be trusted to push any of the policies which he may seem to adapt to pander to the majority.

Just like how Obama promised ‘Hope and change’, talked against Wall Street and in support of Main Street, then proceeded to bail out Wall Street on the back of Main Street and even go as far to try to cut social security until Sanders declared that he would create a mobilization to oppose it.

They are literally two parts of the same establishment, with Trump at least having a little more propensity to bend his policies to accommodate the working class if the push comes to the shove, like in coronavirus pandemic.

Therefore, there is absolutely no difference in between Trump presidency and a Biden presidency as far as the working class, minorities and youth are concerned.

Things like worrying about the composition of supreme court, Trump being ‘horrible’ etc are luxuries of those who are affluent enough to be able to not worry about their loved ones dying if they cant pay $30 more for healthcare.

This makes it so that if Biden is the nominee, working class, minorities and youth, whose vote was openly suppressed, will have no intention of getting out to vote for him.