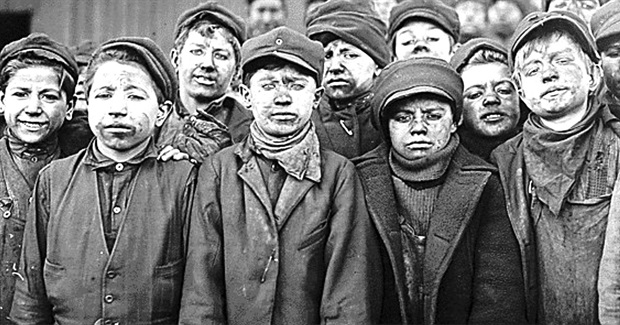 We are told about all these wonderful and social advances during and as a result of industrial revolution, and a rosy picture is being painted in which all segments of the society benefited from.

The reality is different – British government issued enclosure acts to shut down commons – rivers, forests, common land to peasants in order to force them out of villages to make them into a cheap labor force in cities, and also force them to buy things instead of making their own – shoes, clothes and more.

The Invention of Capitalism: How a Self-Sufficient Peasantry was Whipped Into Industrial Wage Slaves

People ended up living in smoke-filled unhealthy suburbs, underpaid, overworked, unhealthy, underfed, with no rights or prospects they had before. One of the things which a lot of ladies from this class lamented, was how they lost the time which they were using for reading books and engaging in literature, after they became laborers as opposed to their earlier status as peasants.

It was brutally implemented through military/legal power, and the advocates of this process were quite rabid and honest in their advocacy and intent:

“Poverty is therefore a most necessary and indispensable ingredient in society…It is the source of wealth, since without poverty, there could be no labour; there could be no riches, no refinement, no comfort, and no benefit to those who may be possessed of wealth.”