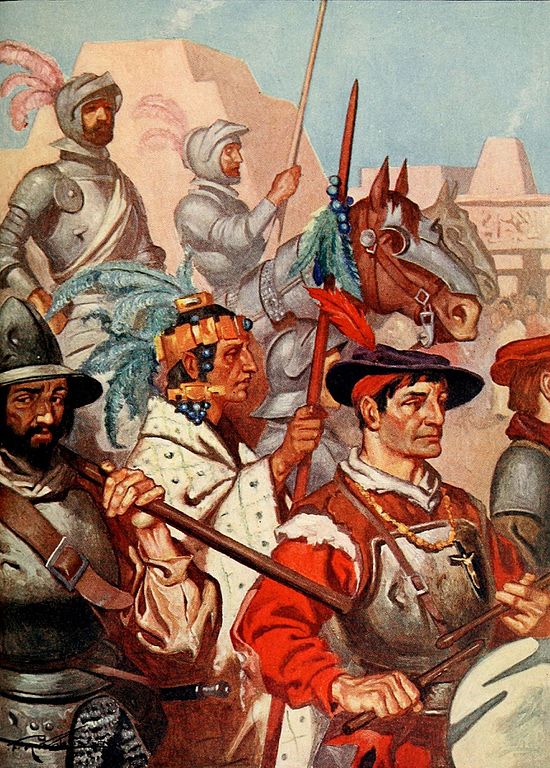 That goes even without saying, as we know. The brutal Spanish conquistadors, enslavement, rape and pillage, Spanish Inquisition and all that.

We are told about these in history. We are reminded about the brutality of Spanish conquest of Americas over and over. How Cortez and his 300-500 men brutally conquered an entire continent, how scared were the Natives of his guns and so on. Even if ~300 men conquering an entire continent sounds a little… well… ‘exaggerated’… Especially if one has any reading into history of warfare…

It does sound exaggerated because when you actually delve into the recorded history, you end up discovering that it is patently false. Along with a lot of other ‘historical facts’ which we are repeatedly told. The actual written and verifiable history shows an orthogonally different reality than what is commonly portrayed in popular literature, all the way from the start, and things just keep unfolding.

Let’s have a look and go through the myths one by one, from enslavement to genocide

We find that Spanish King Fernando II signed a decree as early as 1512, which declared Native Americans as ‘free men’, and mandated that they would be paid a fair wage for any job they were employed in. (Laws of Burgos) This happened even before first reports of wide scale and systematic maltreatment of Natives started to come in. At this point remember that Columbus himself had been recalled and died in disgrace and poverty as a result of maltreatment of natives during his stint.

It wasn’t Cortez and his men who massacred the ~200,000 Aztecs when Tenochtitlan was conquered by ~1000 Spaniards and their ~80,000 Native american allies – it was their allies. People whose relatives, even family members were taken as tribute by Aztecs and were massacred or were eatenin ritual slaughter, or were kept as food stock to be eaten in famines. These people didn’t have any mercy for their Aztec compatriots. It’s questionable whether Cortez and his men would want to stop their allies after knowing what Aztecs did to them, and its totally questionable that they could.

When Cortez was recalled back to Spain in 1528, the remaining colonial administrator, Guzman, engages in pillaging, enslavement and wars against the native american populations. Then Cortez returns with a bunch of judges. Spanish had been insisting that natives keep written records of history, which they were not doing until then. The first written records which the natives created during Guzman’s stint are used as evidence against him and native americans testify as witnesses in court for his crimes. Court condemns and sentences Guzman, who is sent back to Spain in chains as a traitor and enemy of the crown for his crimes against native americans.

One of the judges not only rails against slavery of natives in his reports to the Spanish crown, but also proceeds to repair and rebuild the native communities with his own money. He sets up advanced communities in which native americans are taught European technical skills, but their native culture is preserved. They rule themselves and are called “Republicas de Indios”.

To top that, In 1542, a Spanish humanist, las Casas, succeeded in persuading Spanish court, nobility and clergy that Indians could not be treated as subhumans and could not be subjected to slavery, based on humanitarian arguments, leading to Native Americans to be declared Spanish subjects with equal standing with Spaniards. (New Laws) This is a major feat, since such a result could only come with broad agreement of crown, top nobility, and the clergy, not just the crown itself. This means that the majority of the Spanish establishment agreed with these humanist arguments.

Again, in 1550, he won another debate against private interests who were arguing that Natives were subhuman and therefore needed ‘masters’ to ‘civilize’.

Local nobility and establishment tried to circumvent these decrees to the extent they could, to exploit and prosper at the expense of Natives, rebelled against the New Laws under the leadership Pizzaro’s half-brother Gonzalo Pizzaro who ruled major regions as a noble, but then this led to Spanish crown recalling then appointed viceroy and sending a viceroy who was specifically tasked with implementing these laws, who beat Pizzaro and executed him. Even if the crown was not able to fully assert all the laws it issued due to resistance from local nobility, it still succeeded in granting immense protections, rights and comparable equality for its native subjects.

As a result, there are 6 million~ pure blooded Incans today, Native Americans are either majority in numerous South American countries or constitute significant segments inside the population in others, and there are entire races of mixed European-Native ancestry which we call Mexicans and other South Americans.

Compare this to North America, where someone is counted ‘Native american’ if s/he has 1/40 native american blood, solely because Anglo establishment eradicated an entire continent.

Such arguments as las Casas made were unimaginable in Anglosphere.There wasnt even such an ongoing debate – native americans were subhuman, and because they weren’t even good for using as slaves (they knew the land and escaped), it was better to totally eradicate them. This fit in totally with the agenda of chartered colonization companies because it maximized their profit, and English crown, because it maximized the share it got from those profits and the trade.

But, it wasn’t only las Casas who was in contrast with the Anglo-literature propaganda that goes back to Elizabethan age. Spanish actions and deeds in South America from the start spark a large contrast to what is claimed by that literature:

They were only ~300–500 people. As any student of history would know, 300 people can never conquer an entire continent. Even if they were actually brutal.

The reality is that it was Spanish conquistadors and their Indian allies who conquered the Aztec. In the last pitched battles, Aztec army numbered towards 100,000~, and the alliance army that fought them also numbered around the same 100,000~ mark. Spanish was just a part of that army, and they were leading the army as the alliance leaders.

And, they did it spectacularly well, through strategy, diplomacy and all the traits which the anglo-literature deprives them of; for it takes a lot of diplomatic skill to lead hundreds of different tribes which had numerous enmities among themselves that go back to hundreds of years and unite them in a cohesive military operation. By the way, Europe has never seen any military operation that big like these ones, from ancient Rome to Early Modern Age. It is a major feat in many ways.

There was a factor which united all these tribes and allied them with the Spanish: their hatred of Aztecs.

Aztecs, who were yearly sacrificing up to ~100,000 people empire wide, including children.

As you can understand, after a hundred or so years of having your youth, women, children murdered in altars, camaraderie towards the fellow natives who rule you goes out of the window. As such, many local tribes and kingdoms were utterly hating the Aztec with their guts.

The brutality which a segment of Aztec population was subjected to after the fall of their empire, therefore, becomes very easy to understand – it wasnt something that was propagated by the ~300–500 conquistadors, it would necessitate hundreds of thousands of people seeking revenge for their people slaughtered in the altars.

In contrast to what Anglo-sphere used to do with natives, seeing them as non-human and treating them as such, Spanish treated them as equals:

Spanish declared and treated New Spain as a part of Spain. Not as a colony, or a land to exploit.

There are many other sub-topics which can be examined here, however these main points go beyond the needed arguments which would explain the great disparage in between actual historical reality and Anglosphere-propagated narrative.

Why is there such a narrative in Anglosphere?

Simply because of the fact that when Elizabethan establishment tried the ‘Look how evil they are, look how we are the torch bearers of freedom’ propaganda to legitimize their political position and interests and vilify their enemy, it worked.

And as you have possibly immediately noticed, this propaganda mechanic stayed exactly the same throughout 500 years, and it is still employed by the Anglosphere establishment today – ranging from invasions in Middle East to economic/clandestine warfare against any targeted country.

The propaganda, as you can judge from recent history, is effective both abroad and at home – it easily persuades the citizens of its own country that they are ‘the good guys’, due to the tendency in mankind to be on the good side, and abroad it easily instills doubt about and even successes in vilifying the targeted country.

Naturally, those who grow up in Anglosphere or anglosphere-influenced countries with a never-ending torrent of ‘we are the good guys, they are the bad guys’ in every topic of history including the colonization era, grow up with a view of reality that is practically manufactured at the expense of actual history. And naturally these people find ‘outrageous acts’ of the rival establishments as things that require justice, but the civilization-scale genocidal acts of their own establishment as ‘mistakes’, or just ‘happenings’.

Like how majority of North American native american populations have stayed virtually intact under the rule of French, Spanish and Mexican establishments for ~300 years and did not get wiped out by epidemics, but they suddenly started suffering epidemics which wiped them out when they fell under United States rule…

An epidemic, indeed, but not an epidemic of the biological kind.

Nice Day for a Genocide: Shocking Quotes on Indians By US Leaders

By Spain, Portugal or anyone else…

Conquest cannot be justified – if some ‘superior’ alien civilization would attempt to conquer you today, ‘for your own good’ , you would resist with all you have.

As a result this information does not support any ultra-nationalist or extremist viewpoints. Neither it can be used for that purpose.

What it does is to just set the historical record straight to free it of extreme bias of a particular establishment.