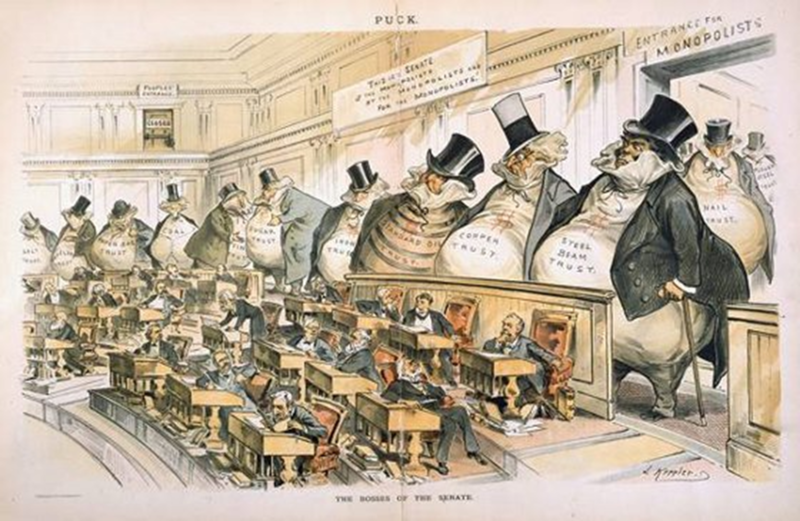 It’s not ‘bad capitalism’ or ‘corporatism’ or anything. It is exactly what was intended to be.

Or, rather, going back to what it was intended to be…

See, this is how it was, and how it was supposed to be all the way to today until Theodore Roosevelt, FDR and other meddlers came in with their regulations and social reforms and socialist measures to reduce inequality and rein in power of private minority wealthy.

Towards late 19th century, the social and economic situation was more or less like this, with a tiny wealthy elite basically owning and commanding entire economy, and therefore politics. While the people worked in near-slave wage jobs with no protection or prospects. Ah, and child labour.

Ok, granted, its has some difference today – there is some social welfare and protection, child labor is banned, and wage situation is not as bad as it was. Its still not actual Capitalism.

But it is getting there.

Just look at the situation in 3rd world countries where people work in slave labor farms with no protection and are easily disposable. That is the condition which ‘the market’ needs and wants. The maximum profitability is in such an environment – not an environment in which you, as a citizen, get a decent life, self-satisfaction with your work and protections.

Therefore, the private interests are doing everything in their power to dismantle any laws and regulations which prevent that environment – one look at what has been done since Reagan is striking indicator of this.

Now that we have established that there is no such thing as ‘Modern American’ Capitalism but it is capitalism itself, let’s see the arguments against it:

Capitalism does not limit wealth. Which means that one person can amass as much wealth as s/he can.

It assumes that these immensely greedy people who aim for sitting on top of everyone and owning everything would ‘compete’ with each other and this would somehow ‘benefit’ everyone, but that does not happen.

Because competition is unprofitable, collusion is. Game theory rather unmistakably proved this.

Even if they actually competed, eventually some would win and amass most of the wealth, and it would end up the same.

This is due to profit mechanism inherent in it, and wealth not being limited – it is ok for one person to own everything in a country. That would basically make him the king of that country, but it is compatible with capitalism.

That’s another kicker – anyone who stops maximizing their profits for anything, gets behind by those who don’t stop.

Those who maximize their profits to maximum extent gain more capital, which allows them to take over more of the economy, which adds to their power.

Those who stop maximizing their profits at morals are undone by these players – bought out, bankrupted, taken over, put out of the game through any means.

So, it becomes a race to the bottom of psychopathy. Those who work people to the maximum by giving them the smallest wage win big. Those who sell lead painted toys to children and get away with it, win big. Those who kick elderly grandmothers out of their ancestral homes, win big.

Hence social security, welfare, social programs must be abolished, taxes must be zeroed if possible, and people must work for ever-decreasing wages in ever increasing hours and productivity by expecting no benefits or security so that profits can be maximized from that end as well.

So, two things, unlimited wealth and profit maximization mechanic causes wealth concentration, which ends up not only in the above socioeconomic atmosphere, but also puts wealth, therefore power, in the hands of a tiny minority few.

The Class-Domination Theory of Power

Naturally, this affects politics. Those who own the wealth, command the politics – as you can see even from today’s political atmosphere in US. They put their own people into offices, and these people in turn do whatever their backers want.

There goes democracy as well, there goes any of the ‘freedoms’ citizens had.

It does, because that’s the eventual end of capitalism – after all wealth is concentrated in a tiny segment of the society, after these start commanding the democratic process in the society and have the final word on what happens, that ends up in feudalism. Your freedoms become dangerous for their wealth, and they must be suppressed.

If you try to remedy that process with any measure that limits their power or wealth, or tries to redistribute concentrated wealth back to the society, you get accused as a ‘socialist’.

That’s because you are.

Any measure that upsets private concentrated power and propagates the interests of the majority, is a social’ist’ measure. From there comes the term in the first place…

That’s why corporate elite hate left, socialism so much and fervently do propaganda against these – lest you may get ideas.

Famous UCSC study i referenced earlier gives the number of the identifiable elite population in US near some ~10,000 people. Who not only hold controlling shares, positions in almost all companies in a syndicated fashion, in addition to their already existing massive wealth, but also act consciously with a class consciousness for their interests and against the people’s interests, because their interests conflict with the majority of the population.

So, biggest argument against capitalism is that, it is basically a race back to Feudalism, with a tiny minority elite commanding everything and enjoying all benefits while the masses keep laboring hard to keep the luxury of the privileged going while having little to no say in their own fate or their society.